Lance wrote this story in English his 9th grade year…

I was diagnosed with cancer on September 2, 2014. I had a blood cancer. It was called T-Cell Acute Lymphoblastic Leukemia (or ALL). I was 13 years old and had just started 8th grade when I was diagnosed. I completed my treatments on December 29, 2017 after almost 3 and 1/2 years of chemotherapy. I’m doing OK. I do have issues with peripheral neuropathy and osteoporosis, and I also have not gotten my appetite back just yet. Like many cancer patients, the effects of your treatment stay with you forever.

I became very sick, very suddenly. Everyone thought I had a stomach virus.

On Labor Day of 2014, my parents took me to an urgent care facility trying to find out what was wrong. After visiting the doctor, I was told to leave and head to the hospital – immediately. At the ER I was told that something was wrong and that I needed to be admitted to the hospital. I was transferred by ambulance to Dell Children’s in Austin.

The next morning I was told I had cancer and that I had to be flown to Dallas by helicopter for two life-saving leukapheresis treatments (full blood transfusions to separate out one’s white blood cells). I was diagnosed with CNS (Central Nervous System) Level 3 ALL. This meant that I had cancer cells everywhere. My kidneys and other organs as well as all of my lymph nodes, were full of cancer cells. They were afraid the lymph nodes in my neck were going to collapse on my throat and suffocate me.

Because of this, I had to do two surgeries and my leukapheresis treatments awake and without being put under. The two surgeries were for 1) a dual-catheter put in my thigh that the leukapheresis treatment needed and 2) my initial PICC (Peripherally Inserted Central Catheter) line. Since they did not have time to put a port in my chest, they put a access line in my arm so I could get chemo for the 1st thirty days.

Once in Dallas @ Children’s Medical Center, I had two leukapheresis treatments that took about 8 hours to complete. After finishing the treatments, I was then given my first chemo. I did not get a chance to think about things, they were just trying to save my life. I was given my first chemo just 48 hours after going to the ER for what we thought was a stomach bug.

I could tell you some really, really bad stories about that first week… but I responded very well to the chemo. Even though it made me really sick, by the end of the week in Dallas I was told I could go home.

During my treatment I had many downs and some ups, but I am healing and look forward to a more normal life. At one point during my primary treatment I weighed 78 pounds. At the start of my fight – I weighed 115 pounds. That means I lost 37 pounds (or 32% of my weight) at that rough point.

I missed my entire 8th grade year of school. This was mainly due to the fact my immune system was so weak. I spent over 100 days in the hospital during my treatment due to just being sick (fever) and having no immune system. I was finally able to start my 9th grade year in high school. 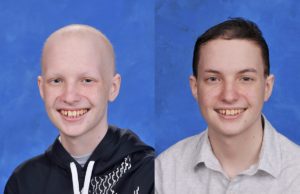 Left: me in September of my 9th Grade year after 1 year out of school. Right: me in December that same year…

Many people ask me why I started Lift Brigade… well, I will start by saying cancer treatment is painful, scary, and lonely.

Sometimes I would be sitting in my doctor’s office or hospital bed, and I would hear crying, and screams, and sounds from other kids around me that made me want to help them and tell them, “It’s going to be okay, you just need to get through this moment.”

When Make-A-Wish® came to me for my wish they told me to wish BIG, I couldn’t think of anything that would be bigger than helping other teens like me and the younger kids.

There are a lot of things you don’t want to remember when you are going through cancer treatment. I had to overcome being scared, being in extreme pain, being nauseous all of the time, being so weak I couldn’t walk or stand and so thin I couldn’t control my own body temperature, and feeling all alone. Feeling all alone was one of the worst things I went through.

My hope is that through Lift Brigade, I can help others ‘get away’ and find a place to cope with their treatment experience, and to know they are not alone.

Thank you for your support!